Today: where spirits and women (but not men) make babies 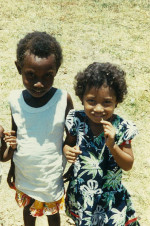 Today in the Trobriand Islands people do not think men have anything to do with making babies. The man has nothing to do with putting anything IN the vagina or womb (sperm, semen, or seed). His role is to keep the baby-passage (vagina) open and lubricated so the baby can come OUT.

Life is a joint venture between women and the spirits of dead ancestors. The theory goes like this: a person's soul or spirit does not die. It goes to one of the furthermost islands, Tuma, where it leads a constantly rejuvenating, happy existence among other spirits. At some point, the spirit desires to return to the physical world and, with the assistance of a controlling spirit, does so after leaping back in age and transforming itself into a small pre-formed infant. It then makes it's way into the womb of a living woman, where it grows, and is born as her child. 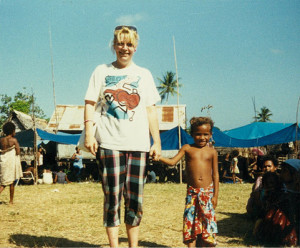 This is me enjoying the market with a little friend. 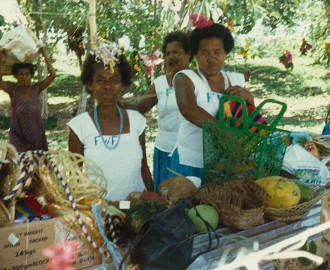 Everything here is the opposite of the patriarchal life-view. Because sex has nothing to do with making babies, it’s very free. There are no derogatory terms like slut or nymphomaniac. If you say a girl is a virgin, that's an insult. I was told that the girl with the most boyfriends on the go at the same time is considered the belle of the village. Premarital lovemaking is done in the bushes or bachelor's house.

It goes without saying there’s no preference for baby boys, and the idea of infanticide is abhorrent. Because the mother is the ‘parent’, children go with her in the case of divorce. 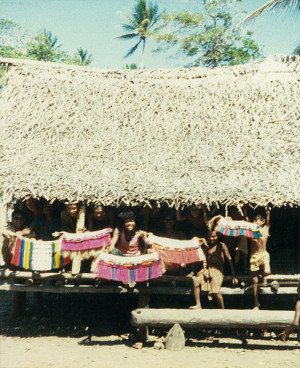 These guys are hanging out at 'The Batchelor's House'. As you can see, they have made colorful grass skirts for the ladies.

Although men are not biological fathers they do have a role in childcare. A man is 'father' in two senses: the man who stands in “intimate relation” to the mother; and the maternal uncle. The father who lives in the house with the mother and children is tama, the man you and I would think of as father ... the man who has a deep affection for the children – who cares for them, plays with them, and helps with schooling. But that man is also kadagu, father to his sister's children, who ‘belong’ to his village. He has a certain authority over these children, and can ask for their help, as well as give help to them. It is his job to impart tribal custom to them, and he becomes more important to them as time goes on. 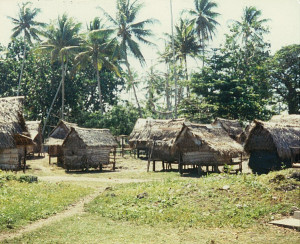 There are 14 islands in the Trobriand group, and most of them are tiny specs in the hugeness of the Pacific Ocean. The largest island is Kiriwina, which is about thirty miles long and between two and ten miles wide. People live in scattered villages, in houses built on short stilts. The walls are made of woven leaves and the roofs are thatched grass. People tend their gardens, their few animals, and go fishing. They look very happy. 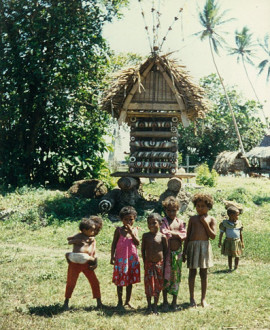 These children are outside 'The Yam House'.

Because children are the spirits of ancestors, usually a maternal relative, telling a child off or punishing them is simply not done. The children have their own 'republic', and tend their own gardens, and basically come and go as they wish. 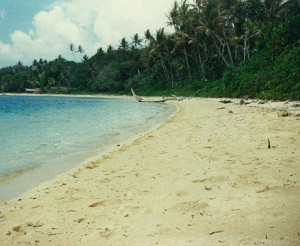 When the lifestyle of the Trobriands was revealed to the outside world by the anthropologist Bronislaw Malinowski in the 1920's, it caused a sensation. Christian missionaries eagerly set off, intending to convert the people and bring their sexually-free lifestyle to an end. It didn't work. There is a church, and people are happy to go there and sing and pray. But when they come out, they resume the same sexually-free life they have always had. This is just one example of how people all around the world, and at all times, can live lives that seem contradictory. Nothing is simple, especially when it comes to people and society. 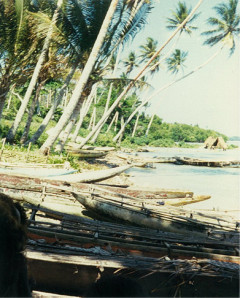 Over the years the Trobrianders have been told about ovum and sperm many times but they don’t care about them. They find the physical details of reproduction completely irrelevant. I was told "So the man puts something, so the woman puts something. So what?". There's only one important word in the Trobriand reproduction vocabulary and it's "baloma" - spirit.  As far as they're concerned, the spirit is everything, and it grows in the body of the woman. Those two facts are their essential facts of life, even after 100 years of outside interference.

Throughout the continent of Australia, Aborigines from north, south, east, and west had somewhat similar ideas about reproduction, saying the spirit of the child came from some natural source – a rock, a plant, etc. – which came into the body of a woman, where it was grown. In a sense, even the mother is not a parent. The important thing is where the spirit-child came from because that determines a person’s totem-group. Men were required to be fathers – and the totem-group linked them to the child. Sex is just something pleasurable, unrelated in any direct way to conception. A comprehensive account of Aboriginal theories is found in Ashley Montagu’s Coming Into Being Among The Australian Aborigines, where he made the important point that procreative beliefs are the starting point of family systems, social organisation, religion, and world view.

All these things the patriarchal white man tried to smash as he marched across the continent, with the aim of taking the land from the people who had been living there for 40,000 years. And the irony is that the white patriarchal invaders imported male-seed ideas about reproduction that were utterly and profoundly wrong. And with these incorrect ideas came a whole plethora of nonsense about the 'nature' of men and women, which the indiginous people were expected to adopt.