Feminist heroes - the men who liberated women from incubator status 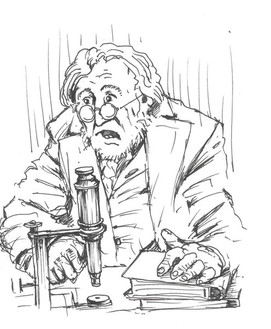 The 'Eureka!' moment in reproduction theory was when Karl Ernst von Baer looked down his microscope and saw a mammalian ovum (from a dog). He wrote in his autobiography that he "recoiled as if struck by lightening", and asked "Is it not strange that a sight which is expected, and indeed hoped for, should be frightening when it eventually materializes?".

Von Baer knew this discovery would overturn entrenched male-centered reproduction theory and alienate him from his peers. He needn't have worried because they just ignored him. The paper he published on the discovery sold so badly his publisher declined to publish his next work. And as for the men of science, they met von Baer's discovery with "altum silentum", as he put it, silence.

Even though von Baer repeated his experiment at a scientific conference 18 months later - using as "sacrifice" the janitor's dog at the anatomical institute - the community continued to ignore him. 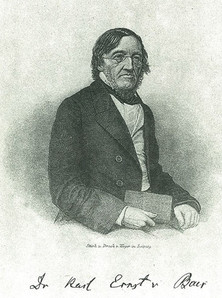 Karl Ernst von Baer - my hero - now known as 'the father of embryology'.

Von Baer became depressed. He attributed his nervous breakdown to "ethical considerations" - in other words, he had dared to open a can of worms that would overturn the nice cozy world of male supremacy. On the issue of joint parentage he wrote "it is still so dark and so little persued that we do not dare risk proposing it." That's right Karl, keep your mouth shut before you get into any more trouble!

Meanwhile, the inconvenient truth of the mammalium ovum could be explained. People had been aware of ovaries for thousands of years and they had attributed to them various roles, including the idea that they provide sexual secretions. The most common idea was that they were like shopping bags holding some kind of food or vital sustenance for the baby growing within. When the ovum came along it was explained as an item of shopping in the shopping basket.

An army of embryologists

It took an army of embryologists 133 years to prove that, in terms of reproduction, women are equal to men.

In the 19th century the emerging field of embryology freaked people out because it showed that, at the embryological stage of development, human beings looked pretty much like pigs, frogs, and other lowly creatures. We seemed to have a family resemblance, and people didn't like that. Also, it seemed to conflict with The Bible (Genesis1:26) where a distinction between man and animals had been made.

Slowly the picture emerged: the egg is fertilized by sperm; then there is division; it is the nuclei of sperm and egg that fuses; a single sperm causes fertilization.  In 1888, working on Ascaris megalocephala worms, Theodor Boveri showed the shape and arrangement of chromosomes is the same in cells before and after cell division.  Two years later, working on sea urchins, he showed that egg and sperm contribute an equal number of sets of chromosomes. Not that anyone understood what chromosomes did, but the reproduction of animals, at least, was beginning to look like an equal process between male and female.

Ten years later, three botanists 'rediscovered' (see below) the research on garden peas by Gregor Mendel, which showed that hereditary traits such as size and colour come from both male and female plants. Theoretically, the story of life could now be told.

As far as human reproduction was concerned, people had to extrapolate from research into slimy pond life and assume things were the same for us. There were many people who were still not prepared to accept any such association.

In 1956, research into human material by Joe Hin Tjio and Albert Levan proved that the normal number of chromosomes is 46. Reproductive equality is a sum: 23 chromosomes from the father + 23 from the mother = the 46 most of us are born with. And actual photographic proof that human sperm enters the ovum and there is fusion (just like a sea urchin) came in 1960. Yes, that is 1960. The Beatles were just tuning up! 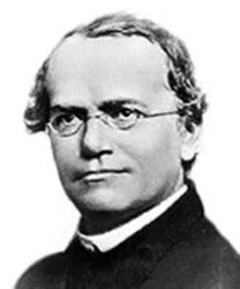 It's often said that the work by Gregor Mendel on the inherited traits of garden peas was 'rediscovered' in 1900, 35 years after he first published it. You might think from this that his papers were sitting in a box somewhere, 'undiscovered'. It wasn't like that.

Mendel spent 7 years meticulously recording the hereditary traits of peas, and published his research in 1865. It showed that male and female plants contribute equally.  His findings were dismissed by a very distinguished biologist of the time, von Nageli. Over the next 35 years, Mendel's work was cited in 22 scientific papers. That means scientists were aware of his work, but not that they necessarily agreed with him. He was used as a reference, that's all, so the authors could show they'd done their homework.

When people say Mendel's work was 'rediscovered', what they mean is that scientists suddenly sat up and took it seriously. By 1900, they could see that von Nageli had been wrong, and Mendel had been right. Unfortunately, Mendel had been dead for 16 years, and never knew how famous and respected he would become.