Hi, my name is Julia Stonehouse and I write about 'the facts of life'. Surprisingly, in terms of ideas about where babies come from, there has only been gender equality for a little over 100 years. In many parts of the world today people are still living with the earlier patriarchal life-view - there is one parent, and he is male. And billions of us live with the traditions that grew logically and inevitably from that idea.

This website, and my book THE MISCONCEPTION  FILES, look at 35,000 years of human history entirely from one point of view: where did they think babies come from? And the answers to that question throw a completely new light on history, archaeology, religion, philosophy, sociology, law and, indeed, all aspects of the human story. I hope you find it interesting. Thanks for visiting!

The logic behind patriarchy evaporated in 1900 AD when scientists finally came to the conclusion that there are two parents (male and female), not just one (the male).

Before 1900 scientists and people in general thought the seed of human life was singular, and came from the testicles of men - who 'planted' it in the soil of women.

Seeds are singular. We plant one of them in the ground and it grows into a single plant which has the seeds of future generations of plants. This is exactly how people used to think about human reproduction - with the seed going along the male line, from grandfather to father to son.

The discoveries that led to the turning point of 1900 were kept away from public discussion. The scientists were not keen for people to know they had made a huge and fundamental error, especially as it was an error - an idea - that had provided solid logic for all patriarchal traditions, which they as men enjoyed.

If you ever wondered how men came to have the upper hand in all things, the male-seed idea of reproduction explains a lot:

The facts of life were completely and profoundly wrong for thousands of years, and during that time people came to all kinds of mistaken ideas about the 'nature' of men and the 'nature' of women. To challenge these ideas was blasphemous because if God is the source of 'nature, to challenge it is to challenge God. And also, to suggest reproduction was accomplished by the fusion of two elements (two seeds) smacked of occultism. You could be put to death for arguing against the male-seed reproduction theory. 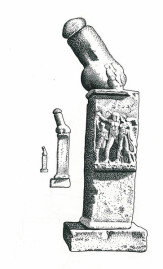 The Avenue of Priapus, Delos, Greece, 3rd century BC. Reconstruction of avenue of columns with carved phalluses.

There have been thousands of reproducion theories, and I would like to see a library covering them all because each one has a profound impact on the culture that holds it. However, this is what I think happened in much of the world, covering Europe, America, the Middle East, The Near East, and The Far East. There have been 4 major theories, going back in time:

(100% man-0% woman: men feel they have the absolute right to control the means of their reproduction ... women).

2. From 10,000 to 3000 BC: there is one seed and it is in the womb of the woman. Men water the seeds with semen. Women are the sole parents because they are the source of the seed.

(0% man-100% woman: men have no say in controlling female sexuality because it is not men's seed).

1. From earliest times to 10,000 BC: women reproduce on their own. Intercourse has nothing to do with reproduction.

The highlighted point in red above (3) is a matter of historical record, usually hidden under the subject 'the history of embryology'.

We are still living with the traditions that evolved during that time because we don't realise there was A BIG MISTAKE because this part of scientific history was covered-up. The men who enjoyed the supremacy that came with being seen as the sole parents were in no hurry to advertise the fact they'd had the facts of life wrong for 5,000 years. Instead, they stayed silent. That's why it's very unlikely you've heard of the embryologists who liberated women from incubator status. And that, in turn, is why so many people think "people have always known the facts of life".

Nothing could be further from the truth.

The most basic fact of life - there are 2 parents - was extemely difficult to establish. And, until it was, people lived with misconceptions that profoundly affected their ideas of what the 'nature' of a man, or the 'nature' of a women, is.

Today millions of people around the world still do not understand there is reproductive equality, while billions live - to differing degrees - with the legacy of the single, male-seed, theory of reproduction.

In my book THE MISCONCEPTION FILES I trace the history of the male-seed idea of reproduction back through time, until the ancient Greeks. Even at this time we can see the interface with an earlier idea - that the seed is in the woman and the man waters it. With this way of thinking the man wasn't thought to be a parent. He helped, sure, but mother was the source of life, not he. And when we examine the iconography of the very earliest times from the point of view of reproduction theory, another  idea emerges: women reproduce without men being involved at all.

This might seem a bizarre concept, but it is no more bizarre than the idea that women are not parents - and that was the idea all the characters of history we know by name lived with - including Charles Darwin, King Henry 8th, and Aristotle. Indeed, there are people living today who think men have nothing whatever to do with reproduction (see the next page).