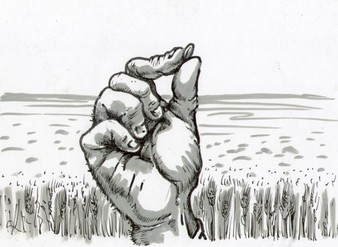 Men are 100% the parents of children; women are 0% parents

The idea that the seed of human life comes from the testicles of men was widely written about and, indeed, taken for granted. Nobody thought in terms of two seeds and fusion and if they dared to suggest it they were accused of blasphemy or occultism.

The essential difficulty with this theory of reproduction is that the source of the seed (the man) is physically distinct from the means of production (the woman). That led to the greatest problem for women - men feeling they had to control the means of their (male) reproduction. This problem was compounded for women because they were thought to have no reproductive rights of their own because they did not in 'fact' reproduce. They became baby-making machines, with men as their controllers.

Ignorance was not bliss for women

The ramifications of the male-seed idea of reproduction included the following:

Patriarchy was inevitable when people thought men alone were parents. Obviously women carry the child within them for 9 months, and give birth to them, and feed them from their breasts. This role was seen as helping men in reproduction. The man is like the farmer planting his seed in the soil of the woman and, like the farmer, he owns whatever grows in his field (the children). And the woman too was thought of as 'his'. I say "thought of" but, in fact, there are millions of people today  who still think exactly like this.

Think of it another way: the man is the baker who puts buns in the oven (woman), and the buns (children) are his. He can take them away, sell them, beat them, rape them. They are HIS to do with whatever he wants. That is patriarchy.

It seemed logical: the man provides the seed; the woman provides the material. Specifically, because a woman stops her monthly bleeding when she's pregnant, people thought that blood went to make up the baby. She provided the "matter" but men provided the seed which gave the matter form, mind, and spirit.

In 350 BC the ancient Greek, Aristotle, who influenced thinking for thousands of years said this: "the male semen cooks and shapes menstrual blood into a new human being".

The 11th century Iranian philosopher Ibn Sina (aka Avicenna) said " ... the seed of man is the principle of movement". This was a key difference between men and women: women provided the material, men made that material alive. Imagine two bodies lying on the floor, one is very still but alive, the other is dead. Both got the physical material from their mother but the difference between life and death - "the principle of movement" - comes from the man.

In Europe a century later the anatomist Ricardo Anglici was saying that semen provides the "spirit and creative power and form".

And so the thinking went, century after century. Charles Darwin's grandfather, the famous English physician and naturalist Erasmus, said in 1794 that "the embryo is provided by the male and the oxygen, food and nidus by the female". The nidus is basically the place where it can grow.

And in the 1850's Charles Darwin worked on his evolution theory having absolutely no idea where babies come from. In 1868 Charles outlined a theory called "pangenesis" and suggested that "gemmules" travelled around the bloodsteam picking up traits that would be inherited, like long eyelashes or an ear for music.

Women: in a maze with no exit

When I look at the horrific position of women around the world today I think, "that was us not so long ago." This was the legal position of married women in England in 1850:

Men: with an inflated sense of their own importance

Avenue of Priapus, Delos, Greece 3rd Century BC. Reconstruction of an avenue of columns with carved phalluses.

Once men had the idea they alone were the source of creation, they had an inflated sense of their own importance. Throughout history they wrote about the 'nature' of men and women, all based on a completely wrong set of 'facts' of life. It's funny now looking back. But for many millions of women around the world it is far from funny. They still live in societies that think the male is superior, and they are inferior. And the laws they have to deal with reflect that. Of course, the people it is absolutely the worst for is the baby girls who get killed at birth for being the wrong gender: the missing millions.